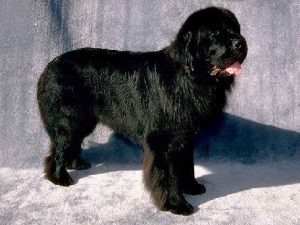 Developed in the Newfoundland province of Canada, this dog looks the part of a rugged northland worker.  On land it pulled sleds and carried packs.  At the shore it helped fishermen haul in nets and carried objects from ship-to-shore.  In dire times, it carried rescue lines to shipwreck victims.  The breed is both tireless and fearless—the stuff heroes are made of.  Much of the refinement of the breed took place in England, where it was enormously popular in the 19th century.  This admirable companion has been shown in the United States since dog shows began.