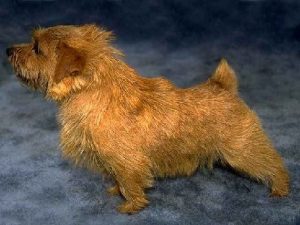 The working terrier of East Anglia was developed in the 19th century.  There wasn’t much uniformity of type until 1923 when the dogs were given the name Norwich Terrier and accepted into the English Kennel Club.  Originally, both the prick-eared and drop-eared varieties were called Norwich Terrier, and both appeared in the same litter.  However, in 1979, at the request of breeders of the drop-eared variety (who were disgruntled because judges most often gave championship points to the prick-eared variety), the American Kennel Club reclassified the breed.  The prick-eared variety retained the Norwich name and the drop-eared variety was dubbed Norfolk Terrier.  Game and hardy, the little earth terriers were used as house and stable vermin exterminators.  Carried in saddle bags, they were taken on fox hunts to drive the fox from its lair when the hounds had forced it to ground.  Norwich were often around horses, and to this day the breed retains a special affinity for the equine specie.