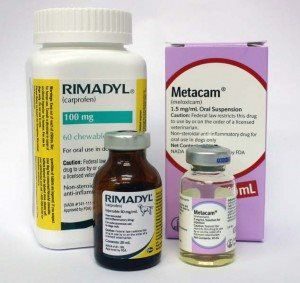 NSAIDS have provided pain relief (analgesia) to pets and people for many years. It seems that there is a new NSAID on the market every time we turn around. With reports of lawsuits in the news over human deaths and serious side effects, one might wonder how safe any of these drugs are for our pets. Being an informed pet owner, we can measure the benefits and risks of these medications. We can be sure that we are providing comfort for our beloved animals, but at the same time, doing no unintended harm.

The term non-steroidal means that the medication does not contain any cortisone derivatives. Cortisone is a potent anti-inflammatory hormone in the body that carries its own benefits and side effects. This designation is mainly to assure that the drug can be used in patients where steroids would be contraindicated. Anti-inflammatory signifies the way that the drug acts to control pain. NSAIDS inhibit cyclooxygenase (COX) enzymes. There are at least three COX enzymes known that are responsible for numerous functions in the body including the mechanism of inflammation. Some NSAIDS target specific COX enzymes and spare others, and some inhibit all COX enzymes. Specific COX inhibitors are designed to spare the beneficial effects of certain enzymes, including protecting the mucosal lining of the stomach. NSAIDS are also non-narcotic, meaning that they do not cause sedation or euphoria, and have no dependency or withdrawal risk.

The first commercially produced NSAID was aspirin, or acetylsalicylic acid. It is a non-selective COX inhibitor. Isolated from tree bark (a folk remedy for headaches) in 1829, Aspirin was a miracle drug in treating minor pain without the risk of addiction to morphine. The side effects of aspirin include possible gastric ulceration and reduced platelet function. Because of the higher doses needed to achieve analgesia in animals, these side effects are even more pronounced in pets than in people. Aspirin was once the most commonly used NSAID in veterinary medicine, but alternative drugs have been developed that are safer for prolonged use.

A large group of NSAIDS called profens include selective and non-selective COX enzyme inhibitors. Ibuprofen (Advil, Motrin) is non-selective and carries the same risk of gastric damage as aspirin. It can be toxic to the liver; so, it is generally avoided as an analgesic for pets. Selective COX inhibiting profens include carprofen (Rimadyl), which is FDA labeled for use in dogs to treat pain. Carprofen can cause liver inflammation in some patients, and baseline liver values are measured before starting this and all NSAIDS. It should not be used in patients that have preexisting liver problems. Gastric ulceration is rare and is usually associated with over-dosage.

Other classes of COX-selective NSAIDS include the oxicams, arylalkanoic acids, and the coxib drugs. These drugs are less likely to cause stomach ulceration and bleeding than non-selective COX inhibitors in theory, however, the most common side effect seen with all of them is gastric irritation. Side effects are usually dose related. Meloxicam (Metacam), etodolac (Etogesic), deracoxib (Deramaxx), and firocoxib (Previcox) are all examples of these newer generation selective COX inhibitors.

NSAIDS are considered safe and effective for the treatment of pain when used according to directions. All of the drugs listed here, with the exception of aspirin and ibuprofen, are FDA approved for use in dogs. Cats do not tolerate most NSAIDS. There is only one drug approved for use in cats, and that is Metacam injectable. It is labeled for one time use only in cats. Other NSAIDS or the misuse of Metacam can be extremely toxic to cats. Never give a cat any pain medication that has not been prescribed by a veterinarian.

NSAIDS should never be combined with aspirin, corticosteroids, or other NSAIDS, as the risk of side effects will be greatly multiplied. Never give an extra dose or increase the dose without consulting a veterinarian. NSAIDS should not be given on an empty stomach.

All NSAIDS that are FDA labeled for use in dogs must display the following statement on their labels; “All dogs should undergo a thorough history and physical examination before initiation of NSAID therapy. Appropriate laboratory tests to establish baseline blood values prior to, and periodically during, the use of any NSAID are strongly recommended.”