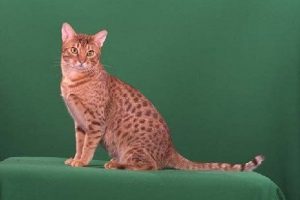 The original Ocicat was the unexpected result of an experimental breeding in 1964 that crossed an Abyssinian with a Siamese.  One of the kittens was born with golden spots on an ivory coat and became the prototype for a new breed.  It is named after its resemblance to the wild Ocelot.  Subsequent crossings with American Shorthairs produced silver colors.  Received championship status in the Cat Fanciers’ Association (CFA) in 1987.