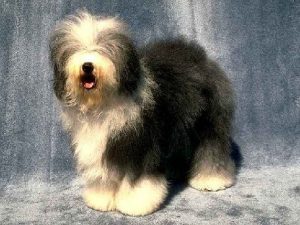 A droving dog as much as it is a herding dog, the Old English was a utility dog in the west of England.  It is thought to be about 150 years old in its present form. At one time it served double duty.  When the sheep were sheared in the spring, the dog was lined up with them and garments were made from its hair.  The breed was brought across the Atlantic in the 1880′s, and the Bobtails were shown at some of the first sanctioned dog shows in the United States.  It wasn’t, however, until 1921 that fanciers put on their first specialty show.