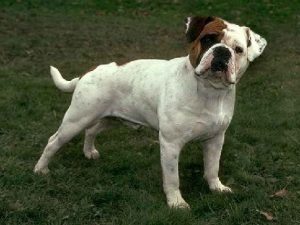 The Olde English Bulldogge is a modern breed that was created to look like the Bulldog of the 18th and 19th centuries.  David Leavitt, an American breeder who was tired of the physical problems of the modern Bulldog, used old drawings and engravings to guide him as he tried to produce a breed closer to the old type—one that would not have such pronounced breathing and whelping difficulties.  He mixed Bullmastiff, Bulldog, American Bulldog, and American Pit Bull Terriers.  The Olde English Bulldogge is a large, fierce-looking dog meant to be determined and courageous yet not aggressive.