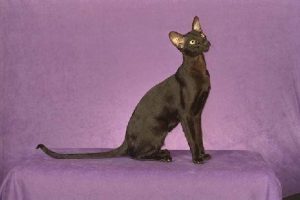 Siamese hybrid that was developed in the 1950′s and 1960′s by breeders who wanted a cat that looked and acted like a Siamese but with a wide range of colors (without the traditional Siamese points).  Siamese were crossed with domestic shorthairs, Russian Blues, and Abyssinians to create the new look and then bred back to Siamese to maintain the Siamese body and personality type.  Although initially resisted by Siamese purists, the breed was accepted for championship by the Cat Fanciers’ Associaton (CFA) in 1977.