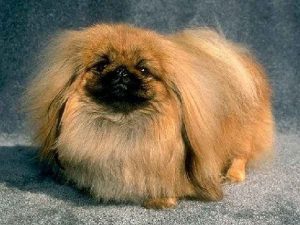 Pekingese were originally considered sacred, the living symbols of the lion that was Buddha’s guardian.  They were the exclusive property of the Emperor and Empress of China.  Theft of a Pekingese was punishable by death.  The Chinese Royal Family often used Pekingese for hunting rabbits because of their excellent retriever abilities.  The first Pekingese dogs to leave the Imperial Palace were dog-napped by the British when they looted the Forbidden City after the Boxer Rebellion in 1860.  One of the dogs was presented to Queen Victoria, who named him Looty.  The tiny oriental dogs were an immediate sensation in Europe.  Soon, they were also in the United States and the breed was registered by the American Kennel Club(AKC) in 1909.