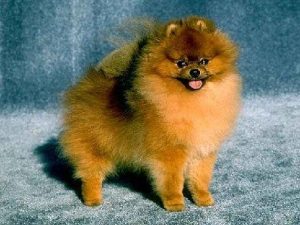 Originally the Pomeranian was a much larger dog used for herding.  It was discovered in the Pomeranian region of Germany, from which it also derived its name.  It is a member of the Spitz family, which includes Samoyeds, Malamutes, and Chow Chows.  Through careful selection of breeding stock, the dog from Pomerania was reduced in size from 30 pounds to its present day weight.  The breed underwent most of the size reduction in Victorian England, but saw continued miniaturization in the 20th century.  The Pomeranian has been recognized in the United States since 1900.