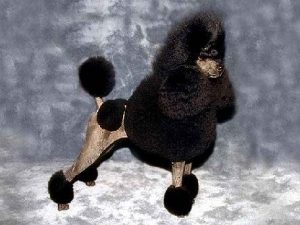 The Poodle originated in Germany as a water retriever (Pudel means water in German).  Today there are three sizes:  toy, miniature and standard.  They are all judged by the same standard of perfection and are identical in every respect except height.   The standard, or largest size, is thought to be the original Poodle.  Although the American Kennel Club (AKC) classifies it as a non-sporting breed, it still retains its hunting abilities and remains an exceptional swimmer.  The Standard is often seen in circuses and obedience rings.