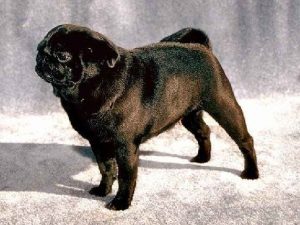 Thought to have originated in China.  The Pug was popular in China, Tibet, and Japan for almost fifteen-hundred years before Europeans discovered it.  The Pug arrived in Europe via Holland in the fifteen-hundreds.  It became the mascot of the Dutch ruling House of Orange when one of these dogs supposedly saved the life of a prince by warning him of Spanish invaders during a battle.  When William of Orange became King of England, he brought Pugs with him.  The breed reached the height of its popularity during his reign.  The pug has been recognized by the American Kennel Club (AKC) since 1885 and has had ups-and-downs in popularity.  At the present, it is ranked twenty-sixth in popularity.