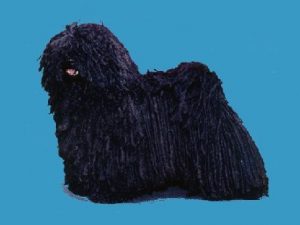 Nomadic shepherds on the steppes of Hungary have kept two kinds of sheep dogs since the ninth century.  One was a big, white, guard dog that protected the flock at night and the other was a small, active, herding dog—the Puli—that actually herded the sheep by day.  They did not cross-breed the two types, and through the centuries, the unique characteristics of each became firmly fixed.  The Magyars did not pay much attention to the outward appearance of the Puli in regard to size, color, ear carriage, etc.  What they were interested in was the dog’s ability to work.  So intelligence and a willingness to please was prized above all.  The original Puli was multi-colored, in the literal sense of the word.  Over the years, more and more color variations were eliminated and by the 1940′s black were believed to be the only purebred Pulis.  Although today the blacks still predominate, there are white, gray, and apricot Pulis.  The latter two are quite rare.  Pulis were imported to the United States in the 1930′s.