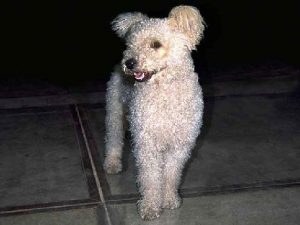 The Pumi began to emerge as a separate breed from lines of the more ancient Hungarian Puli in the late 19th century.  The Puli is a long-haired sheep dog while the Pumi is a herding terrier with a medium-long coat.  The Terrier characteristics are an essential part of the Pumi—both physically and temperamentally.  In 1920 they appeared as a regional variety at a Hungarian show, and in 1923, appeared as a separate breed.  It has never, however, attained the popularity of its parent breed.  The Pumi is a versatile herder, taking responsibility for sheep, geese, and pigs in its homeland.