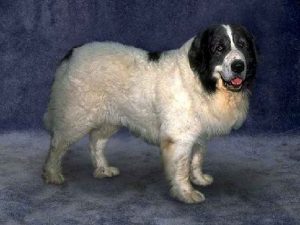 This breed was developed in the region of the Pyrenean Mountains.  It is descended from Mastiff-type dogs that were brought to Spain by the ancient Phoenician traders.  Its primary use was that of a guard dog for livestock.  Still quite rare, at one time it was almost extinct.  The Pyrenean Mastiff is bigger and more massive than the much more popular Pyrenean Mountain Dog, to which it is closely related.