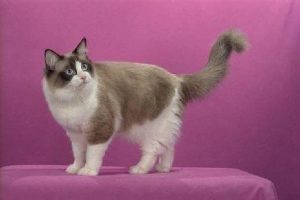 One of the largest breeds of cat, the Ragdoll was developed in California during the 1960′s by Ann Baker who used Persians, Birmans and Burmese-type cats.  No pedigreed cats were used to create the breed.  The combination resulted in kittens with the colorpoint gene as well as a white spotting factor.  Named for the characteristic of going limp like a ragdoll when held.  Although accepted as a breed by most cat associations, the Cat Fanciers’ Association (CFA) does not recognize the Ragdoll for championship status.