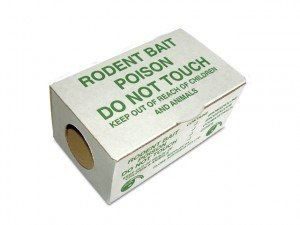 Rat poison is a common toxin found around homes and businesses that pets may accidentally ingest. It is a bait-type poison, meaning it is flavored and scented to attract rodents; it also unfortunately attracts pets. Traditional rodenticides are made of concentrated anticoagulant chemicals such as brodifacoum, warfarin, bromadiolone, and diphacinone. These chemicals when ingested cause an inability in the blood to clot. After a pet consumes this poison, even the smallest injury may lead to uncontrolled bleeding. Fortunately, there is an antidote available for poisons containing these ingredients, but exposure must be recognized before a significant loss of blood – or anemia – occurs. It may take several days after ingesting rat poison before any ill effects are seen. Other rodenticides may contain strychnine, bromethalin, vitamin D analogues, and zinc phosphide to which there is no antidote available. Treating exposure to these toxins is more difficult. It is important to take the package label with you to the veterinarian, when possible, if accidental ingestion is suspected or known.

Rat poisons containing anticoagulant chemicals interfere with the body’s re-use or recycling of vitamin K. Vitamin K is the activator of clotting factors that cause platelet cells in the bloodstream to clump together and form clots when bleeding occurs. After vitamin K is utilized in clotting activity, it is released and recycled for later use. Anticoagulants inhibit this recycling process; therefore vitamin K becomes depleted after an initial activation of clotting factors. This is the reason that it may take several days for vitamin K reserves to become depleted to the point that visible bleeding symptoms may occur.

The treatment for anticoagulant rat poison ingestion involves both the administration of an antidote to prevent bleeding tendencies and measures to correct any anemia or hemorrhage (active bleeding) already caused by the toxin.

The antidote for anticoagulant rodenticide is supplementation of vitamin K. It may take the body several weeks to metabolize and excrete the poison; therefore vitamin K must be re-supplied as it is continually used up by normal clotting activity. Generally, pets are given vitamin K for at least one month following exposure to these types of toxins. The veterinarian may give an initial antidotal injection to ensure rapid restoration of vitamin K stores, followed by a prescription of oral vitamin K that the owner will administer at home. *(Over-the-counter human vitamin K products do not contain a therapeutic level effective at combating the rodenticide; they often contain other vitamins or neutraceutical ingredients and should not be given to pets suspected of rat poison exposure.)

Treatment will also involve correcting any blood loss that has already occurred as a result of exposure to the rat poison. Bleeding can occur anywhere outside or even inside the body. It is common for blood to pool in the lungs and in the abdomen. Specific treatments for these scenarios will be instituted. The pet may receive supplemental oxygen and diuretic drugs to remove excess fluid from the lungs to assist in respiration. If a significant amount of blood-loss has occurred, the pet may become anemic. Anemia is a reduced number of red blood cells in the bloodstream. The body will be responding by generating new cells in the bone marrow; however, if anemia is life-threatening, a blood transfusion may be necessary.

If the package label can be identified, it should be taken along with the pet in case of suspected or known rodenticide exposure. This information can help the doctor to determine an appropriate course of treatment and predict the prognosis.

If rodenticides must be used around the home, it is safest to use the anticoagulant types listed previously as there is an antidote available in case of accidental ingestion by pets – or even children.