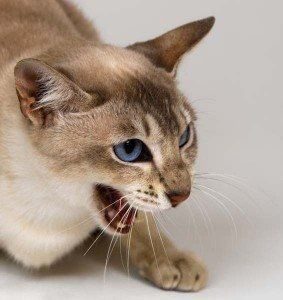 Aggressive behavior by cats can be distressful and dangerous to their owners and other pets in the household. There are numerous forms of feline aggression triggered by different causes. Cats are semi-domesticated animals that revert to their wild instincts in times of play, social interaction, and stress. Aggression should be dealt with early, rather than allowing inappropriate behaviors to escalate until they are unmanageable. Many cats are unfortunately euthanized because of aggressive behaviors that were controlled at the onset.

Play aggression can stem from a kitten being orphaned or weaned at too young an age. Mother cats are very stern with their kittens and teach restraint in play that humans can not communicate to cats. Play aggression can be distinguished from other forms in that it will resemble hunting activity. Cats may hide and pounce on anything that moves, including their owners. The cats are practicing capturing prey, but they may become overly exuberant with teeth and claws. They best way to curb this behavior is to provide a lot of activity that will allow the cat to focus its energy on appropriate objects. Never play aggressively with a cat, and never physically punish him for this behavior as it will only serve to reinforce the behavior. Give the cat instead toys that are interactive. Hanging toys that the cat can bat at, and laser toys to chase are good alternatives to fingers and toes.

Misdirected aggression occurs when a cat is highly agitated by another animal, such as when an indoor cat sees another cat outside a window. If the owner or another household pet gets too near, the upset cat may take out his frustration on the unsuspecting passerby. The only good way to avoid this is to predict it when possible. Close the curtains and remove children and pets from the room. Allow the upset cat to cool down before attempting any interaction with him.

Status related aggression involves conflict in the hierarchy of a multi-cat household. Cats display dominance in different ways than dogs. Disputes over territory are common. It is important to provide each cat with its own personal space. Provide one-on-one attention with the cats in their particular favorite resting spot in the house. Separate litter pans and feeding areas may also be necessary. Territorial disputes can become very aggressive. If so, the cats may need to be kept in separate rooms with closed doors, and then slowly reintroduced to each other. After complete separation for a period of weeks, the door is opened slightly so that the cats can investigate each other. Switch the cats rooms several times during this time so that each cat can become acclimated to the others smell. Switch their bedding and food bowls as well. A common toy that is placed beneath the door may help the cats begin to play together. This may need to be a very slow process, and it should not be rushed. Aggressive behavior, once it becomes established, can be difficult to stop.

It should be noted that bottle raised kittens can become extremely aggressive toward their owners, other pets, and visitors to the home. An orphaned kitten should be placed with an adult cat, especially a female, at the youngest age possible. Adult cats can communicate restraint in aggressive behavior to kittens that humans can not.