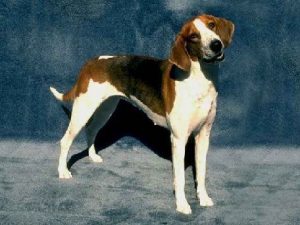 The ancestry of American Foxhounds can be traced back to the hounds owned by Robert Brooke in the 1650′s.  He brought English Foxhounds with him and bred them to be more suitable for hunting in the rolling hills of Maryland and Virginia.  Later, fanciers blended in strains of other English, French, and Irish hounds.  The result was a lighter-boned hound with a keener sense of smell than its English counterpart.  The American Foxhound is considered a dog of the Southeastern states, where fox hunting was considered a gentleman’s sport.