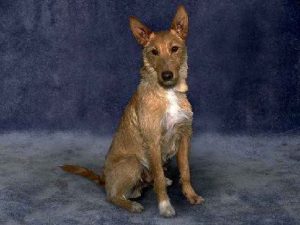 There are three native sight hounds in Portugal, all are closely related.  Podengo (meaning running hound) are divided by size.  The largest, about 25 inches is used mostly for coursing hares.  The middle size Podengo, or Medio, is about 18 inches tall and is used to chase, catch, kill, and retrieve rabbits.  The smallest size, called the Pequeno, is a warren dog that is often used in concert with the Medio.  It is sent down the rabbit hole to flush the quarry to the waiting coursers. The two larger size Podengos are hunted singly or in pairs, in the manner of Greyhounds.  The Pequeno is traditionally hunted in packs, like a Beagle.  The Pequeno is a true, miniature sighthound.  The largest size is believed to be the original form, and it is thought that the other two sizes were bred down from it. The Pequeno, most likely, has some terrier blood mixed in.