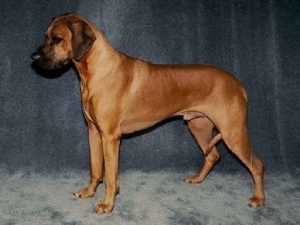 The Rhodesian Ridgeback in spite of its name, is a South African breed.  It was developed by the Boer farmers in the Cape Province in the 19th century for hunting lion that preyed upon their cattle and sheep.  Settlers to neighboring Zimbabwe (formerly Rhodesia) brought the dogs with them in 1876 and drew up the standard which bore the name of the dog’s new homeland.  The hallmark ridge of hair that runs contrary to the rest of the coat is thought to have come from an extinct dog kept by the Hotentot people.  Americans imported the Rhodesian Ridgebacks in 1950 and they were accepted in the American Kennel Club (AKC) registry in 1955.