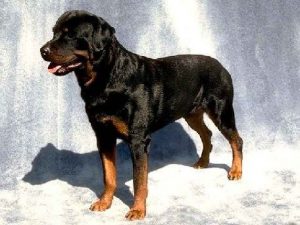 Rottweilers marched with the Roman legions.  The beefy mastiffs were drovers and stock guards, watching over the cattle the army needed for provisions.  Butchers around the town of Rottweil, in Germany, refined the dog in the Middle Ages until it was so good at its job that cattle could be taken to and from the stockyards without a human attendant.  About 1900, the Rottweiler found favor as a police dog, and a German Stud Book was established.  The first Rottweiler was admitted to the American Kennel Club (AKC) Stud Book in 1931.  It wasn’t until 1948 that a championship title was awarded.  The Rottweiler, with its size and guarding instincts, is the second most popular dog in America.