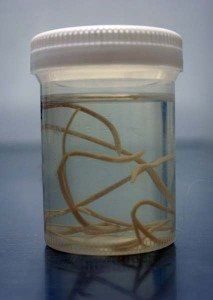 Roundworms are very common intestinal parasites that infect dogs, cats, and people. They are about the diameter of thin spaghetti and can reach 4 to 6 inches long. There are several ways that dogs can become infected with roundworms because of their variable lifecycle. In cats, the parasite’s lifecycle is less complex but equally effective at infecting its host.

Adult roundworms live in the intestines and pass eggs which exit the body in the stool. The eggs remain in the environment for at least one month before microscopic larvae begin to form inside the eggs. At this point, they may be ingested by a dog or a cat, signaling the larvae to emerge from the eggs and invade the intestines of the new host. However, the larvae-occupied eggs may also be ingested by another animal such as a rodent. If this occurs, the larvae will hatch, but they will migrate out of the intestines and into other organs. There they form cysts which wait to be consumed by a dog when it kills its prey. Some roundworm larvae will encyst in the dog’s liver indefinitely, until they are signaled by a female dog’s pregnancy to migrate into the uterus and infect the litter of pups. Roundworm larvae also migrate through lung tissue in order to be coughed up and swallowed to complete their lifecycle. Heavy roundworm infections can lead to severe pneumonia.

Roundworms cause diarrhea. Sometimes, a pet may have such a burden of worms that they will vomit up the worms, horrifying the owner. Puppies and kittens will typically have a pot-bellied appearance and will often be flatulent.

Roundworm eggs are detected by the veterinarian who performs a fecal flotation. The eggs are floated in a salt solution and observed under the microscope. De-worming is repeated on a three to four week interval. As the adult worms are killed, migrating larvae will re-enter the intestines from the lung tissues and re-infect the animal. Be sure not to miss the follow up de-worming. Stools should be removed from the environment to prevent re-infection. Hand washing is essential, and gloves are recommended while handling soiled bedding, etc.

People can become infected by roundworms by accidental ingestion of contaminated soil. Children are especially at risk. Infection of people by roundworms is usually mild or undetected, but can cause permanent damage if it leads to ocular or visceral larval migrans. These conditions are caused by the larvae migrating through the eyes and organs. While rare, ocular larval migrans can lead to blindness.