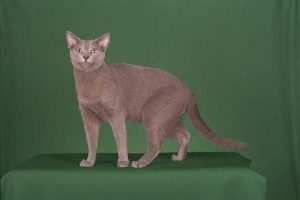 This natural cat was brought to England from Northern Europe in the 1800′s where it was developed into a breed.  In the past, this cat was known by many names including Archangel, Spanish Blue, and Maltese Blue.  The Russian Blue almost became extinct during World War II, but was saved through the efforts of dedicated breeders.  Russian Blues were exported from England into the United States in 1947, but did not become popular show cats until the 1960′s.