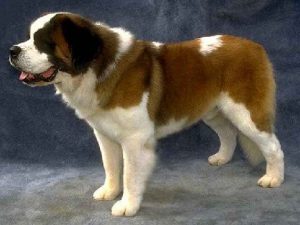 Legend is wrapped all around the history of this noble breed.  Its exact origins are obscure but it is of the mastiff type that came across the Alps with the Roman legions.  When the centurions left, some of the dogs remained behind and the Swiss used them for guarding, herding, and draft duties.  Around the year 1,000 that changed.  Monks founded a hospice that was a refuge for travelers crossing the dangerous alpine passes between Switzerland and Italy.  It was discovered that the dogs at the St. Bernard monastery had an uncanny ability to find people buried in avalanches or lost in the snow.  Soon they were trained for the job of rescuing people.  They are credited with saving more than 3,000 human lives.  The Saint Bernard dogs were coveted around the world.  At the turn of the century, show champions commanded record prices.  The United States breed club was founded in 1888 and Saints were among the most numerous exhibits at early American Kennel Club (AKC) shows.