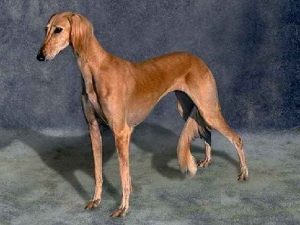 The Saluki may very well be the oldest, purebred dog in existence.  The likeness of a breed resembling it can be found on the carvings made in Sumeria 9,000 years ago.  Mummified remains of Salukis have been found lying alongside the remains of Egyptian pharaohs.  However, the breed was preserved by the Arab peoples, who valued swiftness in both horse and hound.  The swift Saluki was used then, and now, to run down fleet game such as rabbit, hare, gazelle, and antelope.  The Saluki made its way to the United States and received American Kennel Club (AKC) recognition in 1927.