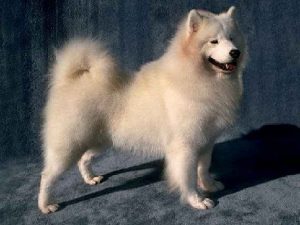 This is the herding dog of the once nomadic Samoyed people, who roamed across Arctic Asia and now live in the regions of Siberia east of the Ural Mountains.  For centuries, the big, white dogs guarded and herded the reindeer, which were the lifeblood of the tribes.  Occasionally, they pulled sleds, but this job usually was relegated to the reindeer.  Most of the modern Samoyeds are descendants of just 12 animals brought out of Russia in the 19th century.  Still used as a sled dog, the Samoyed can withstand the most extreme weather.  The story of the first Samoyed in the United States is a romantic one.  Princess Mercy de Montyglyon was showing some of her collies at a dog show in St. Petersburg when she noticed a Samoyed following her.  She dragged him back to his bench, but the next day he followed her again.  It turns out that he was the favorite of the Grand Duke and no amount of money was enough to purchase him.  However, the heir to the Russian throne was so taken by the dog’s attachment to the Princess that he gave the dog to her.  In 1906, he became the first of his breed to be shown in the United States.