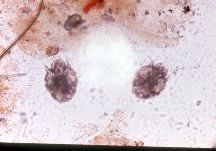 Sarcoptic mange, also called scabies, is an intensely itchy skin disease caused by a Sarcoptes scabei, a microscopic mite that burrows into the skin. Although dogs, cats, and humans all have a similar condition known as scabies, the mites are different for each host. Scabies in dogs is not the same as scabies in people.

Signs
Red, crusty lesions are most commonly seen on the ears, elbows and trunk of infected dogs. The lesions are extremely itchy, helping to distinguish sarcoptic mange from other skin conditions like ringworm and demodectic mange. The skin irritation is caused by the burrowing mites, which also release allergens and toxins into the skin. Constant scratching makes the skin susceptible to secondary infections with bacteria.

Diagnosis
Although the areas of hair loss may lead the veterinarian to suspect sarcoptic mange, the final diagnosis is made by performing a skin scraping test. The skin is scraped in several areas to loosen cells and mites which are then examined microscopically. Because the mites are difficult to find, repeated scrapings are often indicated. Other tests may be performed to make sure the hair loss is not due to a cause other than mites.

Treatment
Treatments may include dips or medications given by mouth or by injection. Treatments are usually given every two weeks until the symptoms have resolved and the pet tests negative for mites.

Prevention
Sarcoptic mange is highly contagious among dogs. Infected dogs should be separated from other dogs until treatment is complete. Most other mammals, including humans, can be infected with a type of Sarcoptes, but the mite is different for each host. Mites from animals may get on people and cause itchiness for a few days, but will not actually cause an infection. However, until the pet is treated, mites may continue causing problems for their owners. People with skin irritations caused by canine scabies should consult their doctor for treatment to reduce the temporary itching sensation.

Cats do not get Sarcoptes, but have a similar disease caused by a different mite, Notoedres cati. It spreads easily among cats. Infected cats should receive prompt treatment and should be separated from other cats until treatment is complete. Like Sarcoptes, Notoedres does not cause scabies in people but may occasionally cause temporary, itchy skin lesions.

True scabies in people is always contracted from close contact with other people. Children, the elderly, and immunosuppressed individuals are at higher risk. Infection is usually the result of prolonged, direct contact between sexual partners or members of the same household. The organism can live for about 72 hours in the environment, so it is possible to spread scabies via sharing of unwashed clothing or bedding.