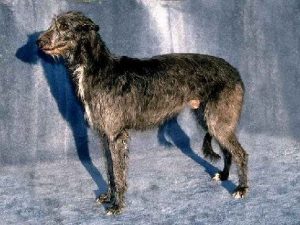 The Scottish Deerhound shares a history with the Irish Wolfhound, at least until the 800′s.  Celtic men wanted a lighter-boned dog to chase deer up and down the mountains of Scotland.  They began to breed an animal that diverged from the heavier wolfhound.  It originally came in all the colors appearing in the wolfhound today, but only gray animals have been seen in the last few decades.  Deerhounds were founding stock when the American Kennel Club (AKC) was organized.