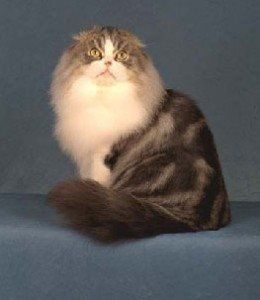 In 1961, William Ross found a litter of folded eared kittens on a farm in Scotland.  He used one, a white cat he named Susie, to develop the breed.  The folded ears are the result of a spontaneous mutation.  Breed was further established by crosses to the British Shorthair and American Shorthair.  Longhaired Folds appeared in litters with their shorthaired counterparts and were developed into a separate division and accepted for championship by the Cat Fanciers’ Association (CFA) in 1992.