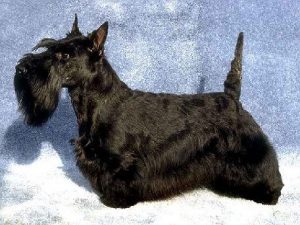 The Scottie is one of the oldest purebred terriers native to the British Isles.  For generations it was bred as an earth dog to roust foxes and other vermin out of under ground dens.  The word terrier stems from the Latin word terra, meaning earth, and reflects the early work of the little tykes.  Type was standardized in the 1880′s.  The Scottie was immensely popular as a working ratter in the United States.  It was one of the founding breeds of the American Kennel Club (AKC).