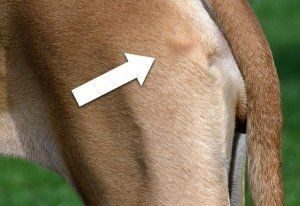 Just like people, as animals age they seem to get “bumpier”. It is important to have each new lump and bump you find on your pet checked by the veterinarian to rule out a cancerous growth. Some animals have a tendency to grow benign masses as well. One such mass is called a sebaceous cyst. Rather than a solid growth of tissue, it is instead a fluid-filled sac under the skin that resembles a tumor. In most cases, sebaceous cysts are harmless and do not require treatment.

All mammals possess sebaceous glands. These glands produce a viscous, oily substance called sebum that lubricates and waterproofs the skin and hair. The glands’ ducts drain into the hair follicles and then onto the surface of the skin. A cyst forms when the sebum flow is occluded for some reason. The gland continues to secrete sebum into a sac that is formed under the obstruction. Sebaceous cysts are quite common in dogs and are one of the few benign masses that may show up on cats occasionally. They are not the same as a sebaceous tumor however, which have a wart-like appearance and have a tendency to become inflamed and ulcerated.

Most of the time, a sebaceous cyst will grow until the gland ceases to produce sebum due to back-pressure. It may be sensitive to the touch, and may become so hard that it feels like a solid mass. Occasionally, the skin covering the cyst will lose blood supply from being over-stretched, and it will devitalize and rupture. The oily sebum and sloughed skin cells are a feast for bacteria, and the draining cyst can become infected. An infected sebaceous cyst will have to be treated topically. There is no blood supply into the cyst to carry oral antibiotics. Matted hair must be clipped away, and the open cyst must be cleaned in order to prevent a subsequent abscess.

After an infected cyst finally heals – which can take several weeks – the entire process can recur. Sebaceous cysts that are prone to this cycle should be surgically removed. This should ideally be performed before the cyst ruptures and becomes infected. Very small cysts might be removed with a local anesthetic, but usually a general anesthetic will be required.

There are other types of fluid-filled cysts that can be safely drained with a needle and syringe. This is usually impossible with a sebaceous cyst as the sebum is too thick to aspirate. A needle with a large enough bore to draw out the sebum could create a significant puncture wound that could introduce bacteria. If the cyst becomes infected, it will require treatment and eventual removal anyway. It is generally recommended to surgically remove a problematic sebaceous cyst, and leave a dormant one alone.