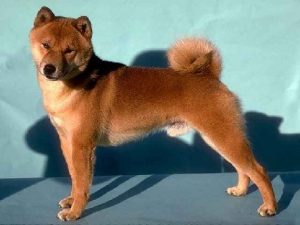 A native Japanese breed, the Shiba Inu looks like the typical Spitz-type Northern breed.  It is not, however, part of the family that includes the Husky, Samoyed and Keeshond.  It is more closely related to the Chow Chow, Shar Pei, and Dingo.  Shibas are a multi-purpose hunting dog.  They are quick enough to chase down most four-legged game and agile enough to snatch an ascending bird right out of the air.  In the 1950′s, a combination of World War II and distemper almost wiped out this ancient breed.  However, breeders in Japan and abroad have made this little hunter quite popular.  It has been registered with the American Kennel Club (AKC) since 1993 and, in a testimonial to its appeal, two years later has surpassed more than half the long established breeds in popularity.