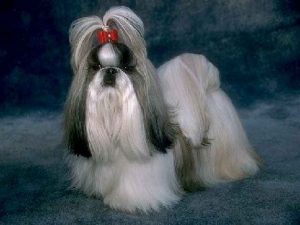 Although it is associated with the Emperors of China, the Shih Tzu is of Tibetan origin.  Shih Tzu dogs probably came to China as gifts from the Dalai Lama.  There was a religious significance.  The little dogs were said to be the living embodiment of the lion, which is revered in the Orient as the guardian of Buddha.  They remained the property of Chinese nobility for centuries and it was not until 1930 that some reached the West.  Most of the little pampered pets were destroyed in the Chinese Revolution but several were sent to England.  From England, they spread around the world.  The Shih Tzu was admitted to the American Kennel Club (AKC) registry in 1969.