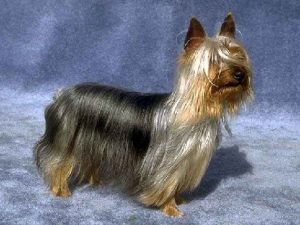 This feisty little terrier was created in Sidney, Australia by crossing Australian Terriers with Yorkshire Terriers.  It got its diminutive size from the Yorkie and its ruggedness and spirit from the Aussie Terrier.  It was first shown in 1907 as the Sidney Silky.  The first representatives of the breed were imported to the United States in the 1950′s and it was accepted for registration by the American Kennel Club (AKC) in 1959.