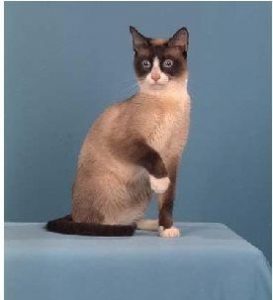 Until breeders worked to remove it, at the turn of the century many Siamese had white markings.  The Snowshoe is a return to a Siamese of Victorian times, with a heavier body, rounder head, and striking white markings.  To create the breed, cat fanciers crossed traditional Applehead-style Siamese with blue or black bicolored American Shorthairs.  Accepted for championship in The International Cat Association (TICA) in 1994.  Not accepted by the Cat Fanciers’ Association (CFA).