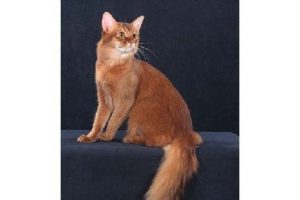 At one time these cats were considered the undesirable result of a recessive gene that caused some Abyssinians to be born with long hair.  A few Abyssinian breeders liked the look and began a breeding program to develop the longhaired Abyssinians as a separate breed.  The breed’s name was chosen because of the close proximity of Somali to Abyssinia.  Accepted for championship status in the Cat Fanciers’ Association (CFA) in 1978.