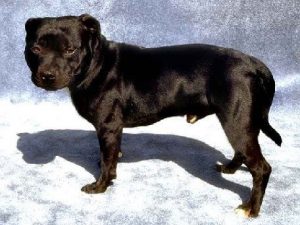 A 19th-century variety of a much older form of bull and terrier cross that was bred for the sport of dog fighting.  After bullbaiting was abolished in England, a smaller, faster dog was created by crossing the Bulldog with more agile terriers.  The outlawing of dog fighting did not wipe out the breed, it merely went underground.  Sad to say, illegal dog fighting continues to this day.  The ruffian street fighter was not granted the respectability of Kennel Club registration in England until 1935, and it took decades for the American Kennel Club (AKC) to acknowledge it.  In 1975, the first Staffordshire Bull Terrier competed in a dog show here.  Today, the fire and fight remain but the show-dog’s temperament has been refined so that it now makes a fine family pet.