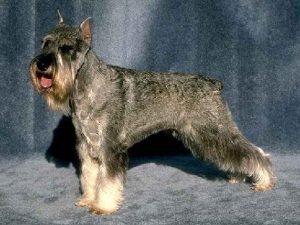 Schnauzers come in three sizes:  Miniature, Giant and Standard.  The two extremes are believed to have sprung from the middle or standard size which is at least 500 years old.  Although the smaller member of the trio is considered a terrier by the American Kennel Club (AKC), the two larger Schnauzers—also with obvious terrier origins—are classified as working dogs.  These Germanic members of the terrier tribe are less fiery than their British cousins and eminently suited for a life of service.  Standard Schnauzers are in demand around the world as guardians and police dogs.  Standard Schnauzers were imported into the United States for show purposes in the 1920′s.