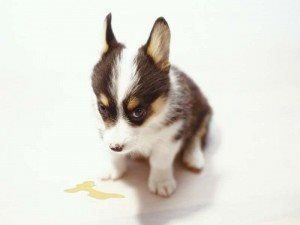 Dogs are descendants of pack animals, and they retain many of their wild canine instincts. Packs have well established hierarchies and strict greeting gestures that confirm each member’s position within the group.

These behaviors are essential to keep the pack working as a unit. Whether hunting prey, establishing territory, or protecting their offspring, each member must know their own role and be reassured by the role that others play. Some of these instincts make dogs very good companions of people, and some behaviors are incompatible in the human household. Submissive urination is a greeting gesture that dogs use to confirm another pack member’s dominance. It is a normal behavior for dogs, but an annoying one for people.

Puppies will often submissively urinate when approached by a person. This is actually a good sign that the dog considers the person dominant. Aggression can stem from a dog that tries to establish dominance over a human. Nevertheless, urinating in the house is unacceptable behavior and needs to be addressed. Reprimand has no place in this situation, as it will only cause more of the same behavior and confuse the dog.

Although a dog of any age and either sex may submissively urinate, this behavior is more common in female puppies. It can be triggered by any gesture of dominance by a human or another dog. A loud voice or excited greeting can cause it, and many times a person is unaware that they acted in any particular way at all. In any case the dog is displaying, in its instinctive way, that it is completely submissive and means no threat.

When a dog makes this submissive display, it may squat or roll over on its back while urinating. The dog may also “grin” by pulling back the edges of its mouth exposing its teeth. This facial gesture could be easily confused with an aggressive snarl. The exposed belly is a signal that the dog wants to “give up” the perceived challenge and is not displaying a desire to be petted. Reaching for an unfamiliar dog when this posture is observed can result in a snap at the fingers – a fear bite.

Puppies can usually be desensitized to submissively urinating over time. Greetings that initiate the posture should be avoided. The dog should be ignored when the owner first arrives home. A high pitched “hello sweetie” will cause the dog to urinate every time. Once the dog has settled down, the owner should move away from the dog and squat down to its level. Without saying anything, the dog is then allowed to approach. At the first hint of the dog squatting, the owner should turn away. Eye contact is a dominance display and can be a trigger for submissive urination.

Everyone who enters the house must follow the same steps to prevent the behavior. A dog that has a tendency to submissively urinate should be let outside before the front door is opened to a visitor. After the visitor is inside, the dog can be introduced slowly, but the visitor should be told to ignore the dog as well. Eventually, the dog will understand that there is no threat, and the submissiveness should subside. Most dogs grow out of this problem. Expect that a dog with this trait will act in the same way during new situations and around new people.