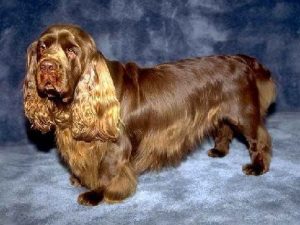 A member of the British Spaniel family, the Sussex is the breed that stands lowest to the ground.  It is heavyset and slow, bred during a time when men still hunted on foot.  Its name comes from the county of England where it was developed.  Said to have a good nose, the Sussex may become more popular as game preserves and foot hunting become the hunting mode of necessity.