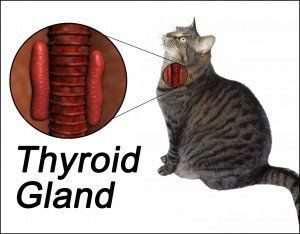 Hyperthyroidism is a very common illness of older cats. It is a condition in which the thyroid gland produces too much thyroid hormone. Symptoms are gradual and easily attributed to the normal aging process. However, the effects of hyperthyroidism on the body are deteriorative and progressive, ultimately resulting in death if untreated. All cats over the age of seven should be screened for hyperthyroidism during their scheduled wellness examinations. Treatment greatly improves quality of life and increases longevity.

Hyperthyroidism in cats is caused by a benign tumor of thyroid tissue that over produces the thyroid hormones T3 and thyroxine (T4). Less than 5% of cases involve a malignancy of the thyroid gland. Correlations between hyperthyroidism and environmental factors are unclear. One study shows an increased statistical incidence of the disease in cats that eat only or mostly canned cat food from “pop-top cans”. There is speculation that the ingredient bisphenol-A, which is used to seal the cans, could be linked to hyperthyroidism. It is not known whether the pop-top cans are coincidental to some other factor which causes this group of cats to seem predisposed to hyperthyroidism. Many cats that have been fed only dry cat food have developed hyperthyroidism; therefore, more study is needed to confirm this hypothesis.

In some cases, a palpable mass can be located at the base of the neck where the thyroid gland lies, but this finding alone is not a diagnosis. An elevated total T4 (T4) or free T4 by equilibrium dialysis (fT4ed) is the only definitive blood test for hyperthyroidism. Nuclear imaging, while effective at diagnosing a thyroid tumor, may be expensive and is of limited availability. As the disease progresses, elevations in liver and kidney values may be revealed. Symptoms include weight loss despite increased or insatiable appetite, vomiting and diarrhea, aggression, and restlessness. A pounding, rapid heart beat can often be felt when holding the cat. High blood pressure accompanies hyperthyroidism and can cause sudden blindness and kidney failure if left untreated.

There are three treatment options for hyperthyroid cats. The treatment of choice is radioactive iodine therapy. It is considered safe and completely curative with a one time treatment in 96 to 98% of cats. Nuclear imaging of the thyroid gland is performed to rule out malignancy and metastasis (tumor spread), and to calculate the exact dose of iodine 131 that will be administered during treatment. Iodine 131 is a radioactive isotope that selectively kills the tumor cells, sparing the healthy tissue. This procedure is only performed by a specialist, and the cat must be hospitalized for up to a week to avoid radioactive contamination of the owners. It is very non-stressful for the cat because anesthesia is not typically necessary, and the actual treatment consists of one injection followed by a week of boarding. This treatment usually requires no on-going therapy.

The second treatment option is an oral medication given twice daily called methimazole (Tapazole). Methimazole is inexpensive and safe, and works by blocking the production of thyroid hormones. The biggest problem with this option is compliance. Many owners find it very difficult to dose the cat with medication at all, let alone twice daily for the rest of its life. There are transdermal methimazole products that are used with some success. These are gels that are rubbed into the ears, however absorption of the drug varies and symptoms may be poorly controlled. Side effects of methimazole are fairly uncommon, but some cats can not tolerate the drug at all. Methimazole therapy is the most commonly employed treatment option by far.

The least pursued option to treat hyperthyroid cats is surgery to remove the overactive part of the thyroid. Many hyperthyroid cats have secondary heart and kidney problems associated with high blood pressure and are thus poor candidates for surgery. These cats are first treated with oral methimazole plus or minus heart and blood pressure medications for 2 to 4 weeks to stabilize them. Preferably, nuclear imaging is performed before surgery to rule out metastasis and clearly define the tumor. Surgery removes one or both lobes of the thyroid gland, carefully preserving the tiny parathyroid gland that sits atop the thyroid. The parathyroid gland controls calcium, an important electrolyte involved in muscle function (including the heart muscle). If this gland is damaged, hypocalcemic crisis may occur, which may be life threatening. When the surgery is successful, it is curative. Some cats may re-develop hyperthyroidism months after surgery, and some cats may become hypothyroid, requiring supplementation of thyroxine from that point forward.

After any treatment, T4 levels are periodically monitored to measure the response to the therapy. When thyroid levels are kept in check, the cat’s quality of life will drastically improve.