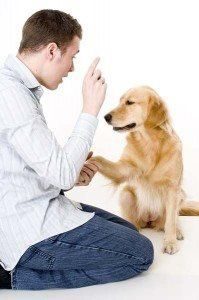 Our dogs retain many of the instincts of their wild canine ancestry. One of which is the dependence on a pack of family members to provide safety and sustenance. The pack establishes roles for each of its members to play, and knowing that role provides a level of confidence and security to all in the group. Likewise, our domesticated dogs seek the boundaries and rules that we as the “pack leaders” establish to keep them safe from harm. Viewing dog training in this manner, an owner will realize that a dog’s actions are never out of spite; rather, the dog is conforming to the rules – or lack thereof – established in the first place.

Inappropriate behavior stems from inconsistency in our training methods. An untrained dog is an insecure dog that does not know what is expected of it; as a result, it will revert to its own survival instincts which may not comply with our expectations.

The goal of training should be to establish and reinforce the trust between the dog and its owner. Consistent techniques will result in a confident dog that is outgoing in all types of situations. The dog will be attentive to the owner’s commands not only to receive instruction but also to provide reassurance. Training begins as soon as the puppy is receptive. Its attention span and ability to learn will be lacking at first, but as it matures the dog will look more to the owner for leadership.

Basic obedience training is the precursor to more complex commands. A search and rescue dog, for example, would not be capable of the complicated task of victim retrieval if it was not able to follow simple sit and stay commands. These basic instructions should be taught in order to build a foundation for further training. Positive reinforcement is the easiest method to make a connection between an action and a pleasurable consequence. Communicating a desired action is not taught with correction. Instead, correction is given when the dog strays from the command, and reward is given when the action is accomplished successfully.

“Sit” is the easiest command for a puppy to learn. The word and hand gesture that is chosen to convey the command should be simple and consistent. A closed forward facing hand works well. Dogs are capable of following multiple word commands, but they really tune in to the one key word and hand signal. To teach a dog to sit, get its attention with a treat. Hold the treat over its head, and say in a low slow voice only one time “sit”. Draw out the word so that it is clear. Move the treat forward passing over the dog’s head as the command is given. Looking up at the treat will naturally cause the dog’s hind end to lower. If the dog turns without sitting, or if he jumps up to retrieve the treat, do not give the reward. Stop, look away, and start over. As soon as his rump hits the ground, give the treat with a ridiculous amount of praise. Make the consequence very rewarding. Afterward, wait a few minutes, and repeat the procedure. Practice the command about five times, two to three times a day. When the command is well understood, give only the hand signal to teach a response with or without a verbal command. This will provide very useful if the situation is distracting or if the dog is out of earshot. Reinforce the command every time the dog is fed a meal. The dog should sit before the food is placed into the bowl.

“Down” is the next logical obedience command to teach the puppy after “sit” is well established. Start by having the dog sit using the closed hand signal method along with the verbal command. Move the hand down and open it, palm facing the ground. “Down” is said one time in a low slow voice. The dog’s nose will follow the hand in anticipation of a treat. After the dog is lying completely head down on the floor, give a treat from the free hand, along with a ton of praise. This command should be practiced verbally and with a hand gesture alone in the same manner as the sit command. “Sit” and “down” should remain separate commands.

“Stay” is more complicated to learn. The duration that the dog will actually stay will be very short at first. Praise and reward should increase as the dog displays more effort. Begin with the sit and down commands, followed by an upward facing open palm with the arm extended. A sharp “stay” will alert the dog that this command has changed from the “down” instruction. Keep the hand out and slowly back away two to three steps. If the dog follows, step forward, and repeat the “stay” command and gesture. When the dog is receptive, slowly lower the hand to your side. Repeat the stay command as necessary to reinforce the behavior. After a short period of time, eventually increasing the duration, say “okay” or “come” to allow the dog to receive treats and praise. The command to “come” can be quickly taught in the follow up to “stay”.

Training more complicated instructions can be built upon these simple commands. As stated before, a dog can not be expected to perform a complex task before understanding these basic concepts. Keep in mind that training provides the dog not only instruction but also reassurance that he is performing his expected job. A good foundation of positively reinforced training will minimize the need for discipline.