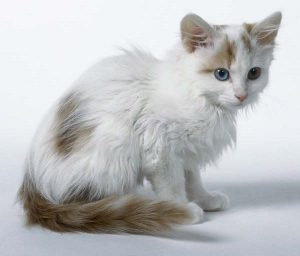 Rare and ancient natural breed that developed in the Lake Van region of Turkish Armenia.  Considered as valuable treasures in their homeland.  In 1955, two English women traveling in Turkey obtained two pairs of Vans and began a breeding program in England, from where the breed was exported to other countries throughout the world.  Accepted for championship in the Cat Fanciers’ Association (CFA) in 1994.