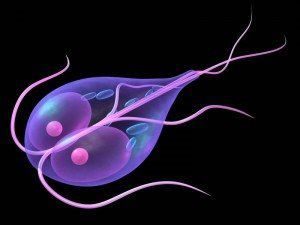 Giardia is a microscopic protozoan parasite of warm blooded animals. Pets and people can become infected by ingesting giardia cysts from contaminated food and water. Symptoms include diarrhea, abdominal pain, flatulence, weight loss, lethargy, and dehydration by fluid loss. Symptoms may be acute, chronic, or intermittent. Giardia is passed in the feces, and pets may re-infect themselves or their owners, making environmental treatment as important as medical treatment.

After ingestion of the cysts, the giardia transform into trophozoites, a motile form of the organism that invades the small intestine. There, they cause damage to the intestinal wall which causes interruption of the absorption of nutrients, leading to malnutrition and weight loss. Diarrhea results from the lack of fat absorption and the colon may become inflamed leading to mucous in the loose stools. Excessive fluid loss can lead to dehydration and death if not corrected.

Diagnosis of giardia is accomplished by fecal examination under a microscope and fecal-antigen testing. The trophozoite and cyst forms of the parasite can be observed in direct smears and flotation techniques, but their numbers may vary greatly in each bowel movement, making this an unreliable method for ruling out giardia in a sick animal. Fecal-antigen tests are much more sensitive since they can detect very low numbers of the organism.

It appears that some animals can become reservoirs of giardia, and remain asymptomatic. Whether they develop resistance to the organism or just harbor low numbers of opportunistic cysts is unclear. There are some advocates for routine screening of pets for giardia.

A vaccine for giardia exists that can reduce the numbers of cysts passed in the feces, and may be useful in a kennel environment where re-infection is likely. The vaccine does not however prevent infection and is not recommended as a core vaccine for all pets.

Giardia infections generally respond well to treatment with fenbendazole or metronidazole. Higher doses of metronidazole can be associated with neurological toxicity, so patients should be monitored for symptoms. Fenbendazole is labeled for pets as young as 6 weeks old and can be used during pregnancy. The two medications may be combined to treat resistant infections. Giardia should always be treated because of the zoonotic risk to people, even if the pet is asymptomatic.

Environmental treatment and bathing of the pet can help prevent re-infection. Giardia cysts are very hardy outside the body. All contaminated surfaces and fabrics should be disinfected with a bleach solution or quaternary ammonia. A mild grooming shampoo can help remove the cysts from the animal’s coat. Stools should be picked up, and the pet should be kept out of the exposed soil.