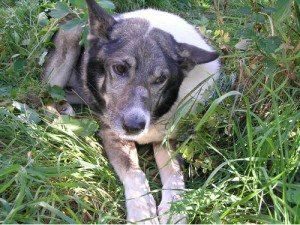 Vestibular Disease is an interruption of the normal mechanisms that control balance and coordination. The receptors responsible for telling the brain which way is up and down, how to right one’s self, and move along terrain without falling are located in the inner ear. Fluid in the semicircular canals moves like the bubble in a carpenter’s level as the body changes position in relation to the earth. Tiny hairs detect this movement and send nerve impulses to the brain and limbs to coordinate motor function. A disconnect sometimes occurs between these systems causing dizziness, stumbling, and a head tilt (the brain’s attempt to correct for loss of balance). Nausea commonly follows. Vestibular Disease can be caused by infection and tumors; however, in older dogs it is commonly an inflammatory process that may occur and resolve spontaneously. This condition is referred to as Idiopathic Vestibular Disease (of an unknown origin) and is the most common form.

Nystagmus (repetitive eye movement) is a common indicator of vestibular problems. The mechanisms that are involved in the perception of orientation directly communicate with the visual system. The ability to fix sight on the surrounding environment is diminished in vestibular disease. The eyes will attempt to compensate and “catch up” with the seemingly moving surroundings. These eye movements can be observed and may help the veterinarian to categorize the type of disease as peripheral or central. A peripheral vestibular lesion involves the inner ear, and a central lesion involves the brain itself. Vertical nystagmus (eye movements are up and down, rather than side to side) is almost always associated with central vestibular disease. Horizontal nystagmus, while not diagnostic, is typical of peripheral lesions. Peripheral vestibular disease has in general a better prognosis (expected outcome) than vestibular disease caused by primary brain lesions.

Other symptoms seen with Vestibular Disease, while they do not help to determine the cause or prognosis, include head tilt, staggering, circling in one direction, falling to one side, and vomiting secondary to dizziness.

Vestibular Disease is further categorized as idiopathic (unknown cause) by ruling out primary brain lesions and other causes of ataxia (incoordination). A complete blood count, chemistry profile, thyroid panel, survey radiograph (x-ray), and urinalysis are used to reveal underlying metabolic and infectious disease processes. Ear infections can cause inflammation of the vestibular system, so they must be ruled out as well. Special imaging with x-rays, MRI, and CT scans can help evaluate the bulla (middle ear cavity), inner ear, and brain to detect occult lesions responsible for symptoms.

The symptoms of Idiopathic Vestibular Disease may spontaneously resolve as quickly as they occur. Nystagmus will generally subside and walking without falling will be possible within 3 to 5 days. The dog may be completely normal within a week or two. Occasionally, the head tilt may persist longer. A head tilt that remains longer than a couple of months is likely to be permanent.

In the past, corticosteroids were given for Idiopathic Vestibular Disease; however, it has been shown that they are of no benefit in speeding recovery. Steroids could be contraindicated in the case of occult infection; therefore they are generally avoided in current treatment protocols for this illness. Symptoms of dizziness and nausea may be improved with the use of anti-vertigo medications such as meclizine (Antivert) and diphenhydramine (Benadryl). Never give any medication without first consulting a veterinarian. Confining the dog to a small area may help avoid injury from falling, and darkening the room may help with symptoms of dizziness.