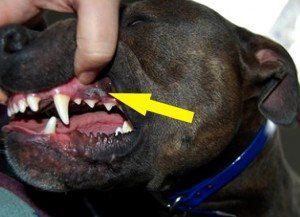 Younger dogs, usually less than two years of age, can sometimes develop wart-like growths on the lips, gums, and tongue as a result of contracting the canine papillomavirus from another dog. The warts caused by this virus are unrelated to the non-viral papillomas that appear on the skin of many geriatric canines. Viral papillomas are technically benign, meaning they cause no illness themselves; however, they tend to grow in large clusters, are susceptible to becoming ulcerated and infected, and may cause discomfort while eating. Because it may be difficult to differentiate a viral papilloma from other masses that occur in the mouth, a biopsy and histological examination by a pathologist may be recommended to identify the mass. In most cases, viral papillomas of young dogs resolve on their own over time without treatment.

The canine papillomavirus is transmitted by contact with the lesions of an infected dog. Young dogs are susceptible because of their underdeveloped immune systems. Papillomavirus may survive outside the body for as long as 2 months in cooler temperatures; therefore, exposure by contact with feeding and water bowls or chew toys may be a possibility. The virus incubates in the recipient animal for 1 or 2 months before warts begin to emerge, so the source animal may not always be identified. This canine-specific virus does not spread to humans or other species of animals.

Viral warts may rarely affect the other mucous membranes of the dog’s body, such as the eyes, ears, anus, genitals, and between the toes. In these cases, the masses may not possess a typical appearance common to the viral warts that occur in the mouth. A surgical biopsy and tissue analysis should be performed to rule out malignancies (cancerous growths). This would be especially true for dogs over two years.

Typically, viral warts of the lips, mouth, and tongue will regress over several months as the dog’s immune system develops and produces antibodies against the virus. Papillomas on other parts of the body may take significantly longer to resolve. In the case that the oral warts become injured or infected, the pet’s owner may notice blood or an odor from the mouth. The mass should be removed and antibiotics started to prevent further complications. The veterinarian may employ a scalpel, electrosurgical device, or cryogenic freezing technique to remove the warts. Canned food, rather than kibble, may be fed for a couple of weeks after surgery to allow the tissue to heal without delay.

The only way to prevent viral papillomas is to prevent exposure to infected dogs. Unfortunately, it is not clear whether a carrier must have active, visible lesions in order to be contagious. Puppies should only be exposed to other dogs whose history of exposure is fairly certain.