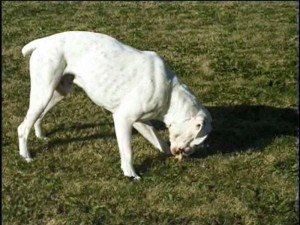 It is not uncommon that a pet may vomit once or twice occasionally without any other symptoms of illness and seem fine afterward. Because of their curious nature, a pet may ingest something they shouldn’t. It may upset the stomach causing the pet to vomit without any ill effect. That said, recurrent vomiting can be a symptom of underlying disease and should be addressed. Acute vomiting that coincides with any other symptoms such as lethargy or diarrhea is cause for concern, and veterinary care should be sought. Vomiting is never “normal”.

Cats groom themselves and occasionally vomit a hairball. This should be infrequent and never assumed to be the cause of continued vomiting. Many illnesses cause vomiting as a symptom, including liver disease, inflammatory bowel, hyperthyroidism, and cancer. A complete physical exam with a blood chemistry panel can often detect occult disease. Cats are notorious for ingesting string and ribbon, which can cause a linear foreign body obstruction in the intestines. This can be a life-threatening problem and requires emergency treatment. Vomiting is the primary symptom of foreign body ingestion.

Dogs too are susceptible to foreign body obstruction. A dog may chew up and swallow parts of toys or tennis balls which may then require surgery to remove. Diseases that cause vomiting in dogs are numerous, including pancreatitis, parvovirus, inner-ear infections, liver disease, and kidney failure. Persistent vomiting should always be considered a symptom of disease.

Vomiting causes rapid water and electrolyte loss, and it upsets the acid-base balance in the body by expelling large amounts of hydrochloric acid produced in the stomach. Repeated vomiting is very traumatic to the stomach and esophagus and can lead to gastric ulceration and bleeding. If possible, take the vomitus – the material vomited – to the vet with your pet. The contents of the vomitus can give the doctor a clue as to the cause.

Diagnostic tests that may be performed on a vomiting pet include a complete blood count, blood chemistry profile, and electrolytes. An abdominal x-ray or ultrasound can reveal gastric and intestinal obstructions and tumors. Assays for gastrointestinal disease and pancreatic specific enzymes may be measured as well.

Treatment for vomiting is first of all symptomatic, but the underlying cause must be addressed and treated to prevent further episodes. A simple diet change may be in order in the case of food allergy, or the vomiting may be a sign of serious organ dysfunction.