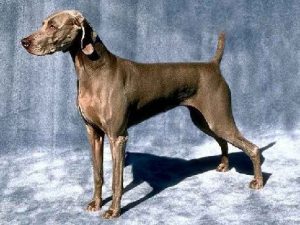 The Weimaraner is an all-around hunter that was bred by aristocratic sportsmen in the Weimar region of Germany.  The breed was jealously guarded and no dogs were sold outside the close-knit circle of nobility in the Weimar court.  It was most likely created by crossing a Bloodhound type dog with German Shorthaired Pointers to get hunters with a better nose and a larger size.  This enabled them to hunt larger game such as wild boar.  In 1929, an American named Howard Knight got a pair of dogs ostensibly for breeding purposes, but the Germans had secretly neutered them.  These were later replaced with fertile dogs and the breed, amidst a great public relations campaign, flourished in the United States.  The short-haired variety was admitted to the American Kennel Club (AKC) in 1943, but the long-haired variety is still unrecognized here.