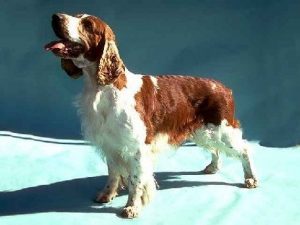 One of the group of spaniels that works before the gun, springing or flushing birds for the hunter.  The ancestors of this breed are thought to have been brought to England with the Gauls in pre-Roman times.  Its similarity to the Brittany Spaniel is evidence for this theory.  Until 1900, it was little seen outside of Wales. Originally shown as a Welsh Cocker, it was granted separate breed status in England in 1902 and shown as the Welsh Springer Spaniel.  A breed club was formed in the United States in 1960 to promote the interests of the Welsh Springer.