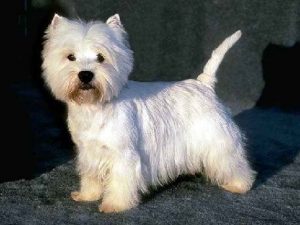 The West Highland White Terrier has a shared history with the Cairn, Scottish, and Dandie Dinmont Terriers (all of which probably come from the same stock).  However, it was a single family—the Malcolms of Poltalloch, Scotland—that was responsible for refining the little white terriers that were originally called by the name of their estate.  Many hunters favored the white coats, which were easily visible in the field.  It is believed that the white coats were selectively bred when they popped up in litters of Cairn Terriers.  The Malcolms quite fancied these game, earth dogs and kept the white strain alive for over a hundred years.  First introduced at British shows in 1900, the Westies were introduced to American fanciers in 1908.  However, it was not until the 1960′s that they skyrocketed on the popularity charts.